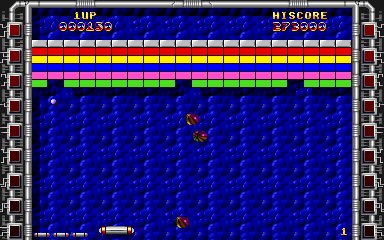 Alongside Minesweeper and Boulderdash, Breakout is one of the most copied and hardly ever bettered games.

On the ST, one game managed to be better and that game was Arkanoid. The basic aim was the same but the addition of power-ups managed to make it something special. I remember spending a lot of time playing this it! 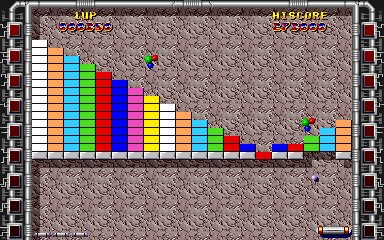 Impulse is an attempt at brining the genre to the Falcon and it succeeds... It is best described as Arkanoid for the Falcon as it brings all the characteristics of the original and spices them up with Falcon specific effects.

The aim is to clear each level of blocks by using your bat to hit a ball around the arena. Some blocks contain powerups some of which help others hinder.

Graphically, the game excells - there is plenty of colour and the backgrounds make use of the Falcons palette. Sonically Impulse is a treat with excellent music and spot effects. 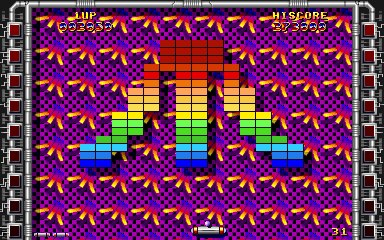 Duranik - the programming team - have programmed a level editor so once you have completed all of their creations you can get on with your own.

Although it brings us nothing new, Impulse is an excellent conversion of one of the all time classics...