Zero-5 was an instant hit when it was released on the STE and Falcon in 1995.

Not long after, Caspian Software announced that a Jaguar version was on the way. They promised a much improved game, in both presentation and gameplay. 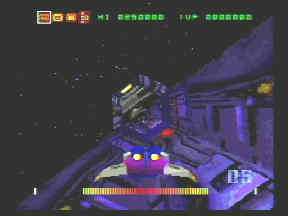 Since then, a couple of years have passed and games are a lot bigger and better than before. During 1996, Caspian announced that they had ceased development of the game and it looked as if one of the most awaited games on the Jag was going to be left floating in limbo.

BUT, it's now 1997 and Telegames have announced that Zero-5 is in fact going to be released very soon.

The best way to describe Zero-5 would be as a visually and sonically superior Frontier without the trading bits. The control system is supposed to be intuitive and if the game has the same playabilty of its older relative then this could be the hottest release on the Jag so far!