One of the biggest hits of the last year just has to be Worms, it's made quite a name for itself and now it is poised to make its way on to the Jag courtesy of Telegames. Colin Polonowski has a look...

Originally slated for release in August, the future of the Jaguar version of Worms was beginning to look very bleak. 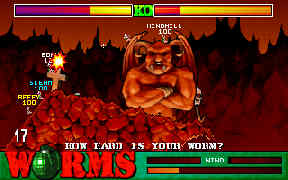 News of Atari abandoning the Jaguar and the sudden drying up of new releases led to most people thinking the worst and that it was indeed about to die. Luckily, Telegames haven't yet given up hope on the Jag and they have grabbed up the rights to quite a few Jaguar games which they intend to release over the next few months.

Worms is undoubtedly going to give the Jag a big push and its about time. The game can be played by up to 4 players and the aim is to be the last surviving person.

Each player has a team of four worms and they also have access to an assortment of different weapons ranging from Bazookas to Dynamite. To make things harder there are also a number of mines for you to avoid.

The Jag can also take control of up to three players so even if you havent got any friends you can still enjoy this.

Undoubtedly, Worms is one game to look out for this Christmas and we'll hopefully have a copy for review very soon!