The Jag has never been very strong in the Beat 'em up stakes. Kasumi Ninja, whilst being visually stunning never really grabbed the publics attention. Things are changing however with the release of Ultra Vortek and Fight For Life, Peter J Campbell gives us his views on the former...

Ultra Vortek, is a two-player, Mortal Kombat-style beat 'em up. What makes it any better than your average Street Fighter? I hear you ask. Well, Ultra Vortek has amazingly slick and smooth scrolling/animation,it's extremely fast,the graphics are beautifully drawn,the sound is superb,the cheats (and there are loads of 'em!) are great :) ,the special moves are awesome and finally, the characters are completely original (Unlike some other MK clones I've seen... ) 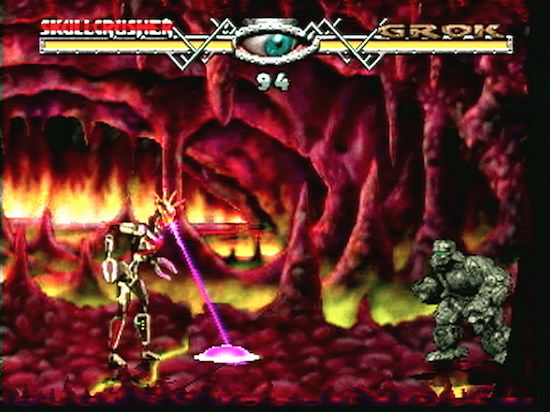 Each character has his/her own special abilities and weaknesess. One character named Volcana, for example, is very fast but fails to be any good whilst attacking in the air!

Now lets get to the best part... the moves! Each character, like I said, has his own special moves such as : Fireballs, teleporting, laser eyes and morphing abilities. These moves are executed by fiddling around with your joypad and pressing loads of buttons at once! Most of the moves are explained in the manual, but a few are left out....

The moves are visually stunning and sometimes gory! :>

As well as fighting moves, each player has their own personal "Annilation" move, which, when executed can be as drastic as chopping your opponents head off!

In conclusion, I would say that this game is an all round winner and definitely one for serious games players. It shows the Jags potential beautifully!